So, with the acquisition of a Trevor James Classic II none-more-blacksophone (what else?), I feel it incumbent on me to bring the expressive stylings of this most saxy of woodwinds to the metallic mosh-party thing. Not that the Fell sound stems entirely from HM (cue Vim Fuego).

Anyway, I used to play sax many moons ago, when punk was the lowest common denominator, British trade unions were funded by the Kremlin and it was said that the advent of domestic computers would lead to more leisure time for all. What a joke. Everyone knows that robots will save us from drudgery, wage-slavery and exploitation by the wealthy. Aaand back to reality.

It'll be interesting, for me at least, to hear how the sax meshes with all the other timbres I'm prone to stuffing into an arrangement. Odd that it's an instrument of the woodwind family when it's made of metal (brass, in the case of the blacksophone). But then the sax does have a wooden reed, which mine doesn't. I use synthetics which are easier to maintain. After all, it's enough of a job keeping my other instruments in shape, as well as the unending chore of updating all the software on which one comes to rely when making mayhem with modern technology.

Just lately, I've moved to Apple Logic Pro X, as well as upgrading to Steinberg HALion 5 and HALion Sonic 2, all ready for write up on my music-tech organ MuzoBlog. Not that I'm bemoaning my lot. I'd much rather be tinkering with noisy toys than working for the man in order to keep directors in bonuses and shareholders in betting slips (aka share certificates), even if I am permanently strapped for promissory notes (aka cash). Then there's this interweb at which you're looking right now.

Time was when an act would rehearse a set, have the manager arrange a tour, do whatever promo could be managed then get out and play. Once in a while, studio time would be booked and there'd be a fraught few days or weeks spent laying down and mixing whatever the fevered brain(s) of the songwriter(s) had hatched. Camaraderie built on the road would collapse into boredom, bitching and comedy snuff abuse in the pressure cooker of the control room. You'd expect advances in technology to reduce the amount of time needed to crank out a cut, but the sheer wealth of options available has inclined some to take an age when nailing a number.

There are those able to just whack out any old thing in a trice or less. A song can be sketched on an iPad at breakfast, sequenced by lunch, then mixed and uploaded to SoundCloud in time for high tea. Bish-bash-bangarang and, often, the results sound like it. However, internet tech has brought with it the massive overhead of engaging with the audience far more intimately than in days of yore. (I find it fun, but there are those who've so little to say musically, there's nothing left when addressing the audience directly. I, meanwhile, can blither on all day whether or not anyone's listening. Try me.)

We've also a generation with access to dodgy download sites and torrents, some members of which seem to think that music is free. And when any twonk with a laptop can knock out a derivative slice of EDM in less time than it takes to tune a guitar, we've not so much torrents as a shitsunami of beat-driven tosh flooding listeners' TeraByte drives. Economics suggest that when supply is plentiful and demand poor, prices fall. So when the supply of music is near infinite and available for, as near as dammit, free, we've the inverse of demand - ie, "shut up and go away, I'm streaming porn".

When your voice is but one among millions of yammering yahoos on SoundCloud, YouTube or whatever, how do you stand out? You could devise gimmicks, such as daft, Gangnam-style dance routines, or be Thicke about it and post a video with tits. Or there's the Zen approach. Create music that expresses what you want to say in your own special way, put it out there, invite people to listen and get on with life. If you're just after money, go into finance. Notoriety? Some nutjobs have found it by returning to school with automatic weapons. Fame and riches? Play the lottery for better odds.

Sure, some aesthetically blessed youngsters make it through hype, but they're no longer their own people. Teams of songwriters, producers, video directors, choreographers, image consultants, PRs, PAs and the rest use them as marionettes. And when such hypesters shave off their hair, get messy with mascara, go nuts on drugs, end up before a judge for shoplifting and are eventually found dead in their own vomit, that's when you see the price they've paid. Yeah, I think I'll stick with the Zen model. 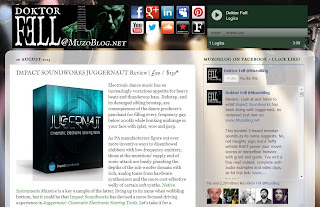 Next time I post here, I should have more concrete news of FellKlang - which tracks I'm releasing, when and how. Between now and then, there's a mountain of instruction manuals to be absorbed, their content subverted and a titanic archive of song sketches to be plundered. Meantime, if you're the tech-obsessed type, follow www.MuzoBlog.net to keep up with the gizmos I bring to bear and make sure to click the Like button on my Facebook page for funnies, curios and tell of further Fell deeds.
Posted by Unknown