Goodbye 2012, we've a whole 2013 for the taking. Lucky for some maybe? I've a more DIY approach to luck. Aside from the usual guitar practice, lyric writing, wrestling with sound-mangling gizmos a-whir in the cacophone and... Oh yes, Christmas. Winterval. Festispend. Pay-day loanisplurge. Whatever what has just gone is called, I've lately been making a few changes to my music-tech blogazine MuzoBlog. 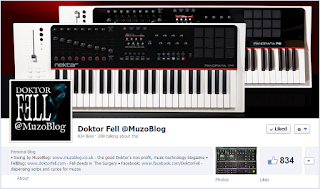 The gradually accreting bloggo-mass is now branded to my own monicker, so it's Doktor Fell @MuzoBlog and I feel a new masthead coming on. As you'd expect, there's a supporting Facebook page, also titled Doktor Fell @MuzoBlog, which is swiftly acquiring followers. If you've not already sussed my Facebook diversions, I've three worth a look:

● Doktor Fell @MuzoBlog - announcements of the new sound-pummelling gadgets that I find appealing.

● FellKlang - a journal of the technical and creative challenges I'm beating myself up with in order to nail that Fell sound. Or FellKlang, as I've taken to calling it. Well, if Imogen Heap can have Heapsongs, I can have FellKlang, and without all the arm flailing

Swing by, hit the pages' Like buttons if you like, preferably while logged into your Facebook personal page, and persuade me that I'm not merely howling into the void. It could be argued that I should direct my energies solely into devising more music, but I'm a die-hard journalist (in my other life), so journalising is, for me, second nature. And sometimes, my ears need a rest.

Philosophical manglings
I aim to keep webwritings reasonably engaging, rather than bombarding you with exhortations to listen to my stuff, buy my records, tell you I'm da boss swaggin' big in da 'hood... ahem. And I find abhorrent the practice of cutting and pasting 'inspiring' quotes from websites that list reams of obvious observations, just to bulk content. Especially when the original speaker is unattributed - a practice I call philosofiltching.

It's clear that those who blurt garbage (like "better to tote a skien of remembrance than be of succour in largesse") have read online-publishing primers advocating daily posts, but have not one original, erudite epithet to deliver. How unusual to find such cynical practice at large in music marketing, eh? I digress.

Casting one's .net
Another significant change for Doktor Fell @MuzoBlog is internationalizationism. Sounds impressive? All it really means is that the top-level domain goes from .co.uk to .net - I would have used .com, but some odious twerp in the States is cyber squatting on it and asking an unreasonable amount for its sale. So stuff that. It'll take time for MuzoBlog.net to suffuse through the simmering sauce of cyberspace, but when steeped, a dot-net will add a certain 'I don't know what' to proceedings. 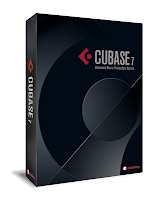 As Edison famously said, genius is one per cent inspiration, 99 per cent marketing bullshit. Not for I, however - there's always a racket going on in my brain, although 'genius' is perhaps not the word for it. Yes, there's music, certainly, much to the detriment of sleep and sanity. To bring forth tunes, I've now the shiny new Steinberg Cubase 7 up and running, am still waiting for Apple to kick out Logic Pro X so I can sync it, and have ReWire behaving itself with Propellerhead Reason 6.5 and its Rack Extensions (get that Korg PolySix RE emulation). I'm also promised Ableton Live 9, which should be with me any day now.

OK, sequencing-wise, such an array of digital-audio workstations is way OTT and I could likely get away with just a synth and a multitrack deck. Back in the day, it'd be a four-track Tascam Portastudio, Shure SM58 and whatever instruments could be 'borrowed'. (One day, I'll give some of it back.)

However, working with a variety of contemporary kit is good for the roundness of my MuzoBlogging. And devising blogposts helps with the music, both in terms of composition and production technique. That's my excuse and I'm sticking to it.

That said, sometimes I yearn to just call up drummer and bassist friends, crank up the Marshall (it's a Mode Four, y'know - 350Watts of neighbourhood-terrorizing power that slays pigeons with every bum note I strum) and rip it up. Just like the old days. But there's a huge volume of new material to extract from my creative bits that needs committing to binary before I go ape with guitar-hero antics. 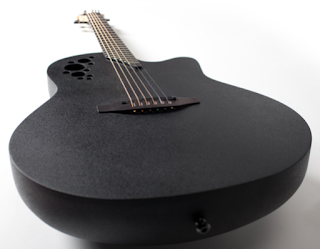 Even so, and for all the computers wheezing and grinding away in The Surgery (some might call it a studio, but I'll press the medical references till they bleed), it's pure catharsis to pick up an acoustic and plunk. While I used to sniff at composite acoustic guitars, preferring the sound, look and feel of wood, my machine of the moment is a bowl-backed Ovation 1778T Elite. Unamplified, it sounds perfectly acceptable and I've hit on a few ways to render it less zingy when recorded. 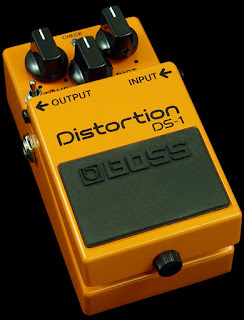 Putting its Piezo through a Keeley-modded overdrive helps (and it's got a funky blue LED! Wahey! (Needs a green one, though)), as does mixing the signal with that from an sE X1 condenser poised over the lower bout. Mess with the phase of the two feeds and you're there(abouts).

I've a feeling the next tranche of FellKlang will be eclectic, what with my diverse listening habits of late. Not just commercial recordings, but playlists hosted by music-orientated social network ReverbNation. I spend a fair bit of time trawling RN, seeking inspiration and hooking up with other artists. At least a few of them are quite personable, once they've figured you're not out to scam them in true music-biz style. I've little data on how efficacious ReverbNation is for marketing my wares, but it's put me in touch with a lot of musical characters, some of whom just play for kicks; others career fulfillment. If you've not sorted a profile there, I suggest you do. It's free and will help a tad with your name's search-engine rank. I gloss over RN acts with no tracks posted, no photo and no bio. If that goes for other visitors, then at least cover those three bases.

Fell deeds awake
And so to the coming year. Unlike some folk, I've a good feeling about 2013. Many things have reached confluence so, with a few shoves here and there, I trust my audience will grow in Fell swoops (or something). My tune may change come Autumn, but no matter. If I didn't deliberately put the music out there, I'd still be writing it anyway because that's what I do. Just because I can't beat Sir Bradley does not mean I should give up cycling.

Despite the parade of the 'challenged', deluded and sectionable assembled for ritual humiliation (ie, TV talent shows); despite charts; despite 'battle of the bands' events, music is not a competition. There are no winners or losers, just artists whose output you like and... the other. It's as simple as that. And if, in pursuit of fame and fortune, you truly crave the adoration of all, medication and therapy can prove partially effective.

No matter what happens, if I produce a tranche of Klang that I'm happy with, then it'll be a fine 2013, regardless of whatever calamities arise from numerical coincidences peculiar to the Gregorian calendar. I hope your year goes similarly swimmingly. Fell
Posted by Unknown