Hectic times here at The Surgery. I've two Facebook pages to nurture now: Doktor Fell and Doktor Fell @MuzoBlog. Do drop Likes at both and, if you're visiting from a Facebook page with a Like button, I'll Likeback. Easy enough. The latter page is to support my music-technology website MuzoBlog which carries heap big comment on high tech for recording musicians. Swing by, have a read and bookmark in your browser if it grabs you.

MuzoBlog has been live for more than two years (veteran technology journo and editor Karl Foster remains in place to maintain publishing integrity) and it's my job to take it forward with regular updates and broader content. So, you'll find news about what I'm up to on this blog and insight into the flavour of tech I favour at MuzoBlog. 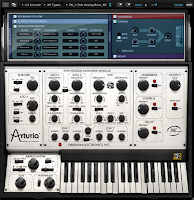 I've picked up some new odds and ends for The Surgery, including Arturia's V Collection of software synths. You'll find my appraisal of the Oberheim SEM V on MuzoBlog and will doubtless be hearing it on several future tracks, such is the superphat timbre on tap.

There are more write-ups to come on the rest of the collection, but meantime I've been casting an eye or two over Toontrack EZkeys and its expansions, including the decidedly feisty Upright Piano. It's sounding good so far and the v1.1 updates have added real beef to its capabilities as a songwriting tool.

For metal-heads, I plan a round-up of Toontrack HM production gizmos, including expansions for EZdrummer, Superior Drummer and EZmix, in time for the developer's, now traditional, Metal Month banging of heads this November. You'll gather from the music I make that I've fairly eclectic tastes and quality metal ranks high among them.

It may have something to do with me being from the British Midlands, arguably the birthplace of the genre. I'd argue that it's all rock music to me, but then so's EDM. And industrial. Which explains why I've an S folder hosting tracks by Sepultura, Skrillex, Skinny Puppy and James Last (might delete that last one).

For all that I'm listening to diverse artists and blogging about music-making gear, my own material develops apace.

I'm still not sure when there'll be a tranche ready for your ears, but we're talking weeks, not months. For now, there's still the dozen tracks I've uploaded to ReverbNation, available in the player at right or by visiting my RN profile, so fill yer boots and/or pimp that PMP before I take it all down to make way for Fell deeds afresh.
Posted by Unknown